Departing from the focuses of the Mumok collections on the avant-garde of the 1960s and 1970s as well as conceptual and socio-analytic approaches in contemporary art, the exhibition Collaborations examines diverse strategies of collective authorship. The exhibition builds a bridge spanning from the smallest to the largest unit of togetherness: from the internal ties of the collective to a particular constellation of the connective, from the artist duo to society—and last but not least, from the love affair to the interconnectedness of life.

The exhibition investigates how artistic models of a “we” can be cultivated for life together as a society: What does collaboration mean in the twenty-first century when fundamental social structures continue to dissolve? How have artists responded to such social and political developments over the decades and what is their position today? How thin is the line between the critique and affirmation of neoliberal structures when building relationships is at risk of becoming an efficiency and profit-driven measure in the artistic realm, too? How can collectivity in thoroughly heterogeneous contexts serve as a social and artistic model of thought and action, when not by accepting the simultaneity of disparate or even contrary elements?

In times of networked connectivity, a look back into art history might advance the current discussion about collaborative action—beyond conventional, social, and national borders. As a movement that not only fundamentally revolutionized artistic production, distribution, and reception paradigms but also originated numerous strategies that represent, as it were, predigital antecedents to algorithms, interconnected networks, and associated models of communitization, the Fluxus movement founded in the 1960s forms the nucleus of the presentation. In addition to the expansion of the typologies of works, image and object traditions, and artistic and participative methods, which were formative for the neo-avant-garde of the mid-twentieth century, the emphasis is placed specifically on the will and ability of artists to go beyond their personal scope in experimental collaborations with colleagues, to allow for change along with the shift in perspective on their own practice.

Collaborations highlights key aspects of the Mumok collection by exhibiting works that operate primarily on a meta-reflexive level. What these works, which often emerged in collective processes, have in common is that they all reflect on ways of living and working together. While the curatorial approach examines artist collectives and their underlying mechanisms and logics, it also frames acting itself as a form of collectivity—a form of acting that equally acknowledges the artistic expressions of individuals as well as those of groups or other models conceived as affiliations and alliances of the participants. The utopian potential of collaborations to transcend Western patriarchal power relations and art market logics of originality and solitary authorship and thereby provoke social change seems to be unwavering.

On Wednesday 15 June at 7:30pm will be held a concert at Villa Lontana (via Cassia 53) to celebrate Maestro Sylvano Bussotti, composer and performer, painter, writer, set designer, director, costume designer and actor.

Bussotti was one of the most original Italian composers of the second half of the 20th century, experimenting with varied and diverse forms of expression.

Manuel Zurria on flutes, Paolo Ravaglia on clarinet and Jacopo Antonicelli on saxophone will perform three solo pieces that are the result of instrumental research conducted by Sylvano Bussotti in the 1980s: ‘Rondò di Scena’ for 4-flute virtuoso, ‘Brutto, ignudo’ for contrabass clarinet and electronics, ‘Ballerina Gialla e Pettirosso’ (1986-89) taken from the collection ‘Voliera’ for saxophone and a version of ‘SOLO’ (1966), excerpted from ‘La Passion Selon Sade’, re-imagined for the 3 instruments with the addition of environmental recordings and electronics with the extraordinary participation of Sylvano Bussotti on piano.

Bussotti was a pioneer in instrumental research and in the extension of musical performance into the theatrical and visual sphere. The 1960s had created a very evident push in this direction with the contribution of other composers (Mauricio Kagel, John Cage and Gyorgy Ligeti), but no one had ever gone further than Bussotti, translating his restlessness with particular graphicisms that equivocally render the need to ‘look beyond’ the score, to find new procedures and solutions.

During the evening, it’s possible to visit the room with Sylvano Bussotti’s works, part of the exhibition ‘IMAGES FOR SOUNDS: Artist Covers for Music Records’ which ended on 30 April 2022. All Bussotti’s images and works are courtesy Giuseppe Garrera.

END_OF_DOCUMENT_TOKEN_TO_BE_REPLACED

[…] Reunion is an event without a score; originally performed by playing a game of chess on a chessboard created by Lowell Cross. The game works as an indeterminate structure: as a game of chess is played, the moves of the players on the board activate four compositions and distribute them to eight speakers surrounding the audience. […] 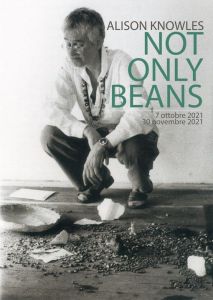 Giulia Niccolai, HOMAGE TO JOHN CAGE AND, BY EXTENTION, TO THE ARTIST

At the centre of the 21er Haus exhibition Duet with Artist – Participation as Artistic Principle lie the audience and its role in the creation of a work of art. Historical and contemporary positions show how artists activate others and call them to action. To think of art as an essential part of life in which “everyone” can participate is not only fundamental to the understanding of art of the 20th and 21st centuries but is one of the fundamental democratic values ​​of our society. The exhibition addresses the active participation of visitors and encourages a critical and creative attitude. In some situations, the viewers perform an artistic act or become an art object themselves. Thus, evoked ideas can become the work of art, as can the execution of instructions or the collaboration with others. The exhibition expands upon the institution of the museum by calling for social action and creating space for encounters. A cooperation between the 21er Haus and the Morsbroich Museum in Leverkusen, Germany. Curated by Axel Köhne. Sep 27th, 2017 to Feb 04th, 2018.