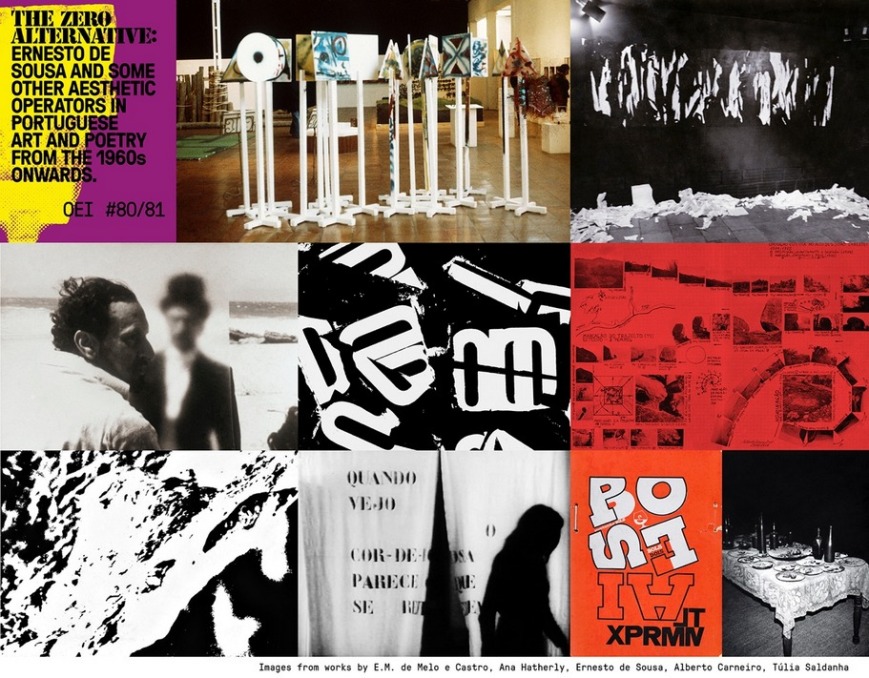 OEI #80–81: ”The zero alternative: Ernesto de Sousa and some other aesthetic operators in Portuguese art and poetry from the 1960s onwards”
Presentation of special issue of OEI magazine

The most recent issue of Stockholm based OEI magazine takes its starting point in Ernesto de Sousa’s explosive activities as filmmaker, photographer, curator, critic, writer, folk art researcher, multimedia artist etc. in the Portuguese 1960s onwards. Being active in almost everything that belongs to the domain of the arts in the broadest sense of the word, Ernesto de Sousa (1921-1988) adopted the term “aesthetic operator” to be used instead of the word “artist” – “for the simple reason that ‘artist’ designates a kind of sociological position and not a philosophical attitude towards the world” (José Miranda Justo).

As a “source of enthusiasm, dynamism and motivation” (Isabel Alves), Ernesto de Sousa created new connections between all sorts of disciplines, forms, materials and social contexts. In its 640 page long textual and visual montage, including a series of new essays and translations of key essays, as well as a lot of archival material, OEI #80-81 also looks at the practices of a number of De Sousa’s fellow “aesthetic operators” (Alberto Carneiro, Túlia Saldanha, Álvaro Lapa, Fernando Calhau, Lourdes Castro, Ana Vieira, Ana Hatherly, E.M. de Melo e Castro, António Barros…). At the same time, OEI #80-81 encompasses texts on magazines such as Poesia Experimental, Operação, Nova, A Urtiga, and Alternativa; and works by artists from younger generations such as Isabel Carvalho, Paulo Mendes and Mariana Silva.

Ernesto de Sousa (Lisbon, 1921–1988) was one of the most complex and active figures of his time, a prolific multidisciplinary artist and an avid producer of synergies between generations of artists from both the first and the second half of the 20th century. Defending an experimental and free artistic expression, he dedicated himself to the study, promotion and practice of the arts, as well as to curatorship, critique and essay writing, photography, cinema and theater. During the 1960s he connected to the Fluxus movement and with the European neo-avant-garde, and became friends with Robert Filliou and Wolf Vostell. This contact was significant to his vision of art as an experimental and participatory “open work”, of which the theatrical exercise Nós Não Estamos Algures (1969), the expanded film Almada, Um Nome de Guerra (1969-1972) and the mixed media Luíz Vaz 73 (with music by composer Jorge Peixinho) are some examples. During this decade and up until the 1980s, he organized courses, conferences and exhibitions on experimental film, video art, performance and happening, while promoting connections between the international neo-avant-garde and the Portuguese context. The exhibition “Alternativa Zero” (Galeria Nacional de Arte Moderna, Lisbon, 1977) synthesized this project of creating a Portuguese avant-garde in aesthetic and ideological dialogue with its international counterparts.
END_OF_DOCUMENT_TOKEN_TO_BE_REPLACED